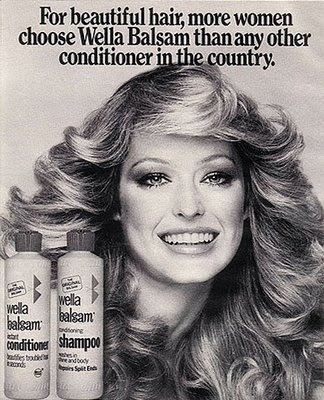 I met Farah Fawcett on several occasions during the late 1970s after she achieved fame for her role in the popular TV show, Charlie’s Angels. She and the other co-stars … Kate Jackson, Cheryl Ladd, and Jaclyn Smith … were retained by the Wella Corporation to act as testimonial spokespersons for a line of consumer and professional hair care products. I started my film production company at about this time, and Wella was one of my very first clients. Yes, those TV and print ads were my handiwork. I wish I had better photos of her to share, but all outtakes became the property of Wella subject to strictly limited usage rights per contract terms. Nevertheless, I used to bring home Farah posters, hot off the press, for my young daughters to hang in their bedroom. Today, those Farah posters are selling on Ebay for a sum.

She was as lovely in person as she appeared in film and was an icon of an era. Born February 2, 1947, she was exactly one day younger than me. Life is fragile and fleeting; my generation is aging. Rest in peace.