A CONTEST OF MADMEN FOR THE PRIMACY OF THE SEWER

By Octopus
If the title of this post caught your attention, you have come to right place. The art of writing an audience-grabbing headline is one of the first lessons learned in Journalism 101 and a convention born in the Gilded Age of the late 19th Century. Yellow journalism is a derisive term that has become synonymous with lurid and sensational headlines, scare- and scandal-mongering, and journalistic misconduct. When discussing the failings of contemporary journalism, the era of the yellow press is likely to be invoked. The criticisms are valid because the features of yellow journalism continue to live and thrive in our modern mass media. Before I continue, perhaps I should give this post a less presupposing title:


Yellow Journalism in the Age of Cable News 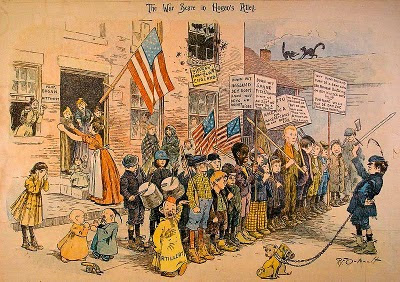 Although elusive to definition, most historians agree on the signature traits of yellow journalism: 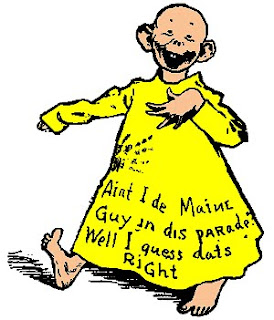 When Pulitzer bought the New York World in 1883, he introduced provocative headlines, pictures, games, and novelties to attract readers and boost circulation. Although Pulitzer was certainly an ambitious and aggressive newspaper entrepreneur, his motives were not entirely self-serving. Pulitzer also believed in journalism as a civic responsibility whose mission is to improve society. In an era marked by immigration, labor unrest, abuses of power, and injustice, Pulitzer transformed the World into the dominant metropolitan daily of New York City … and the leading voice of social reform.

During his student years at Harvard, William Randolph Hearst read and admired the World. When Hearst inherited the San Francisco Examiner from his father in 1887, he resolved to turn it into a similarly engaging tabloid with editorial and layout innovations borrowed from Pulitzer. The Examiner featured garish headlines, crime stories cast as morality plays, crusades against public corruption, and scantily clad pinups. By 1895 and flushed with success, Hearst set his sights on new markets and acquired a penny paper called the New York Journal.

Virtually overnight, the contest between the World and the Journal devolved into a clash of America’s most famous newspaper titans. In the fierce rough-and-tumble rivalries typical of the Gilded Age, each tried to surpass the other with ever more garish headlines and self-congratulatory boasting. In response to competition from the Journal, Pulitzer dropped the price of the World to a penny to drive Hearst out of business. In retaliation, Hearst raided Pulitzer’s staff including Richard Outcault, creator of the ‘Yellow Kid.’ 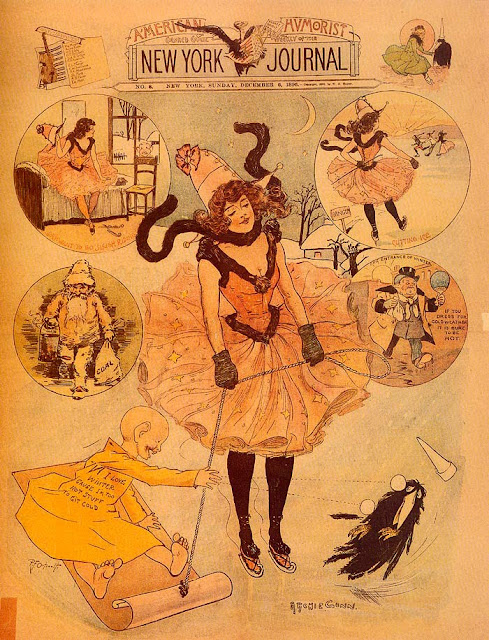 In short order, yellow journalism spread to Boston, Chicago, Denver, and beyond. The staid establishment tabloids of the era denounced the excesses of the yellow press, as evidenced in this 1906 commentary by Harper’s Weekly:


”We may talk about the perils incident to the concentration of wealth, about the perils flowing from a disregard of fiduciary responsibility, about abuses of privilege, about exploiting the government for private advantage; but all these menaces, great as they are, are nothing compared with the deliberate, persistent, artful, purchased endeavor to pervert and vitiate the public judgment.”

Sound familiar? Even in simpler times, critics called attention to the presumed malevolence of media to shape public opinion, a concern still shared a century later. Despite its flamboyant and checkered history, Campbell acknowledges the contributions of a genre that transformed American society and culture:


”It was a lively, provocative, swaggering style of journalism well suited to an innovative and expansive time – a period when the United States first projected its military power beyond the Western Hemisphere in a sustained manner.”

All told, yellow journalism has been described as irritating yet irresistible, imaginative yet frivolous, aggressive yet self-indulgent, and activist but arrogant. These historical accounts are useful in understanding it’s contemporary reincarnations. Against this background, perhaps the more pressing questions to ask ourselves are: What has remained the same? What has changed? Should we be concerned?

To find examples of yellow journalism in contemporary media, we need look no further than supermarket tabloids brimming with stories of alien abductions and lurid celebrity gossip. The genre has migrated from print media to the Internet as embodied in these headlines at the Huffington Post:


Ellen Page Peed In Bucket, Composted Her Urine
Stunning Lingerie Model WILL Run Naked After World Cup Loss
'Nazi Octopus' Slain By Argentine TV Host In World Cup Revenge
As yellow journalists dispense ‘frivolities and slush,’ the last signature trait of the genre is impenitence and a stubborn refusal to be held accountable. Rarely, if ever, will yellow journalists acknowledge their errors, excesses, or indiscretions. These survey results sum up the state of contemporary journalism:


According to the Columbia Journalism Review:


According to the American Society of Newspaper Editors: 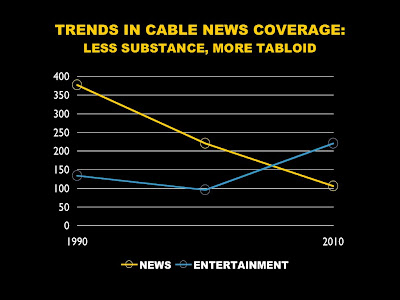 Has anything changed from the Gilded Age to the present? Not according to these surveys. Yellow journalism is not some long deceased ancestor from a bygone era but living offspring born of the same DNA; and no cable news channel typifies the genre better than Fox News.


”Republicans originally thought that Fox worked for us and now we’re discovering we work for Fox. And this balance here has been completely reversed. The thing that sustains a strong Fox network if the thing that undermines a strong Republican party” (David Frum, March 23, 2010).

How ironic! Here is George Bush’s former speechwriter accusing a conservative news network of being the tail that wags the dog. More than a tacit admission of partisan bias, Frum has the temerity to regard Fox News as a dedicated mouthpiece for the Republican Party and the naivety to overlook the prerogatives of independent media operating within the framework of free enterprise. Fox News is far more likely to put commercial self-interest above loyalty, and why should Frum presume otherwise! Furthermore, how does a biased and partisan news network – especially in the employ of powerful interests - better serve the public? According to Howell Rains, former executive editor of the New York Times:


[Fox News] has overturned standards of fairness and objectivity that have guided American print and broadcast journalism since World War II … Why has our profession, through its general silence – or only spasmodic protest – helped Fox legitimize a style of journalism that is dishonest in its intellectual process, untrustworthy in it [sic] conclusions and biased in its gestalt?

For Howell Rains, the answer lies in economics, in the collapse of print journalism, and steep losses in audience share at CNN, CBS, ABC, and NBC. Even Roger Ailes, chief architect of the Fox News stratagem, boasts about seeing himself as a producer of ratings rather than as a journalist, that audience share is his only yardstick. 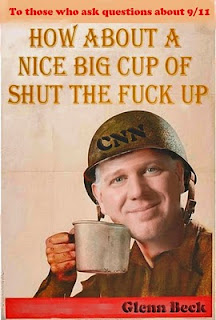 Night after night on Fox News, under-educated former disc jockeys with scarcely a college course on their resumé expound on every conceivable topic – politics, economics, foreign affairs, energy, religion, and public morality. These bellicose, arrogant, and shameless clowns weave delusional narratives about how government death panels will kill your grandmother, how liberals will seize your guns and property, how a sinister art deco plot will subvert capitalism and corrupt your kids. Their daily fulminations are rife with fabrications, misinformation, and outright lies.

Hannity and Beck are modern analogues of the charlatans and fraudsters that once characterized the yellow press. When we catch them in the act of dissembling, they reflexively lash out when criticized, demonize their opponents, or feign innocence by claiming the mantle of entertainment. Perhaps more to the point, they are the ‘yellow kids’ of broadcast journalism. From the Gilded Age to the present, has anything changed?

Historians debunk the myth that Hearst had provoked the Spanish-American War.  There were thousands of independently owned newspapers with close ties to rural communities, and the vast majority of Americans did not live in population centers served by the yellow press.  Thus, no tabloid had the reach or power to influence national opinion (Campbell).

What has changed from the Gilded Age to the present? Media consolidation has concentrated far more power among too few players, which now have the means to dominate markets and “pervert and vitiate the public judgment.”  Sadly, the latest Nielson ratings confirm this impression. Of the top 30 programs on primetime cable news, Fox occupies the top 10 slots: 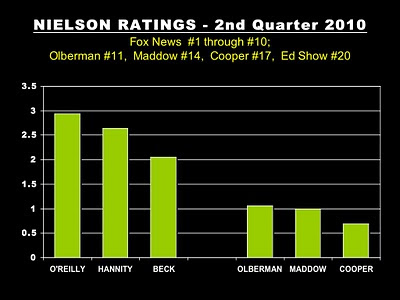 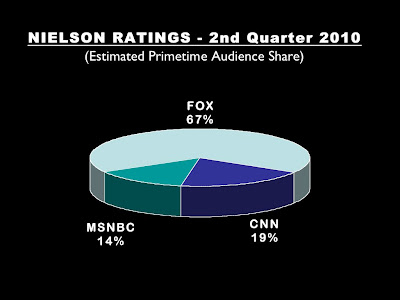 By far, Fox News commands the dominant position in the cable news segment, which gives it a powerful platform to push a hard line partisan agenda and move public opinion. If Roger Ailes understands yellow journalism, he also understands his audience - those undiscerning viewers who forgo critical thinking and prefer to have their morality pre-packaged in church pews and their politics shrink-wrapped on the nightly news.

Should we be concerned? You betcha! We have long known how media can be manipulated – by paying journalists to promote a corporate or industry viewpoint, by hiring PR firms to feed stories to the press, by faking news with maliciously edited videotape, by using smear tactics to destroy reputations, by repeating hot-button weasel words to propagate suspicion and fear, by leveraging the powers of government to shape public opinion and sell a war. We understand intuitively how often our news networks have failed in their mission and betrayed our trust.

Furthermore, we understand intuitively that today’s viewers are far less informed – and more willing to be suckered by demagogues and propagandists - than a generation ago. The Center for Policy Attitudes at the University of Maryland tested this hypothesis. During a seven-month study, researchers asked news consumers a series of questions about the Iraq War and world opinion of American foreign policy. What they measured: A disturbing pattern of wrong answers, errors, and misconceptions by cable news source: 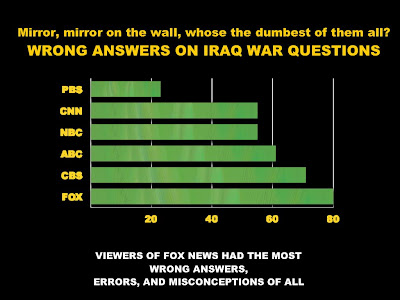 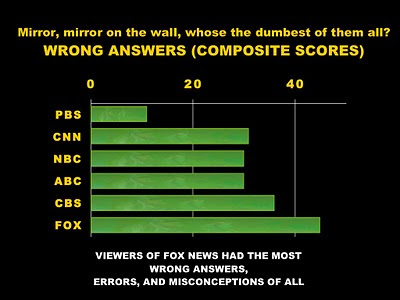 Surprisingly, differences in party affiliation and educational attainment do not fully account for these results. Among Republicans, those who got their news from cable networks had a 25% higher error rate compared with those who got their news from PBS/NPR. For viewers with a college education, the error rate for cable news consumers averaged 27%, compared with only 10% for patrons of PBS/NPR. Clearly, cable news networks are failing to inform the public, and the worst by far is Fox.

In closing, I leave you with the following quotations:


"You think we have come a long way in terms of race relations in this country, but we keep going backwards. We have become more racist. This was their doing. Breitbart put that together, misrepresenting what I was saying, and Fox carried it" (Shirley Sherrod, July 21, 2010).

In his keynote address to the National Conference on Media Reform (November 8, 2003), Bill Moyers warned of a “quasi-official partisan press ideologically linked to … the most powerful interests in the world.”  I leave the last word to our friend and colleague at the Swash Zone, Bloggingdino, who recently said (11:31 AM, July 21, 2010):


“I'm reminded of William Shirer's account in The Rise and Fall of the Third Reich of just how strongly a non-stop stream of propaganda affected his own judgment … he [Shirer] found it hard to discount completely even the sort of offal that his journalistic instincts told him must be false, mainly because it was coming through vital information channels and being repeated by everyone. Amplification and bad argument from authority, in other words, worked together to create a toxic discursive bubble inside of which an entire nation was forced to live and breathe.”

That’s the way it is in 2010. American news journalism has finally fulfilled the ambitions of its progenitors by turning itself into “a contest of madmen for the primacy of the sewer.” Good night and good luck.