I know, I know, you're going to tell me that I'm obsessed with Ann Coulter and I should just ignore her until she goes away. Well, I'm not and she won't of course, but it's just that every time I think I've identified the craziest or most repugnant, evil minded, nasty and dishonest humanoid resident within the US borders, Ann, like one of those sea cucumbers that extrudes its intestines in order to gross out predators, gives us another and bigger load from her oversized colon. 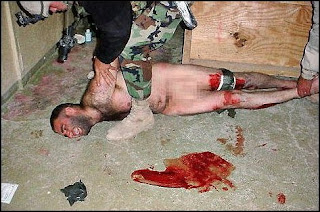 Yes, of course Rush Gassbaugh is already on record as stating that the beatings, the attachment of electrodes to testicles and worse at Abu Ghraib were something only a girly man and liberal would object to, but Abu Ghraib is old news. It's all about Guantanamo and it's Ann's turn to tell us that waterboarding someone 189 times is just like a carnival ride people would actually pay to experience and that "the Muslims" are laughing at our weakness because we don't torture them enough. Only a hundred have died, after all. What we do is to put an "adorable little caterpillar" in someones cell, said adorable Ann to Sean "insanity" Hannity -- kind of like Monty Python's Spanish Inquisition using soft pillows and comfy chairs. We're "Wussies" for having any sense of morality greater than a jackal's says Ann while lounging around her luxury Palm Beach estate drinking a glass of human blood and munching on some child's barbecued leg.

Of course she's referring to our playing on some prisoner's phobias and to some, being trapped and unable to prevent an insect crawling up their leg is worse than pain. We all have some secret fear, after all. Imagine being trapped in an elevator with Coulter and Limbaugh, for instance, on the day you forgot to take your gun with you.

So I guess what the Arm Chair warriors from Palm Beach would like to see, is an America so utterly depraved and devoid of conscience as to make the world shudder in horror as we torture, maim and kill for pleasure -- you know, like real men like Ann and Rush do. Well they don't actually do anything, but they do giggle and laugh and snicker and mock decency while telling us we're "godless" for not torturing more people in more horrific ways and that we're suffering from "derangement syndromes" for criticizing evil.

Anyway, the dishonesty, the depravity, the malignant personality of laughing Ann doesn't need me to criticize it. Someone who makes a living lying, insisting that concerns of right and wrong, good and evil are for weaklings and that only cruel and inhuman leaders who make us safe by terrifying and disgusting the world can be supported -- while ridiculing liberals for being without religion isn't going to listen, and those who support her will simply read inexplicable hostility into my words and claim she's the victim.

We don't burn these people at the stake any more -- perhaps that's the danger of being Godless, but I'm just as happy that he's dead or gone or never was at all, since this is the kind of thing that would provoke any deity into raising the sea level once again.
Posted by Capt. Fogg at Friday, May 01, 2009