Internet predators and trolls are known to have a callous disregard for fellow human beings. They troll for sport, amusement, and narcissistic gratification. They use these forums as billboards for graffiti, name-calling, off-topic rants, taunts, and the cyberspace equivalent of road rage. Some predators sink to the level of sadism.

One of our beloved writers, Shaw Kenawe of Progressive Eruptions, has just been diagnosed with cancer. This is her second bout in as many years. She survived a previous bout … without health insurance.

Not merely this recurrence, Shaw has suffered other setbacks as well. Earlier this year, her sister passed away. She worries about another family member who is gravely ill. All told, this has been a very tough year for Shaw.

Understandably, she supports healthcare reform among other liberal causes … sentiments that have turned her into a magnet for attacks by right wing predators. Not just any attack, but low, vile, cowardly, sexist attacks such as this from a blogger who calls himself bluepitbull: 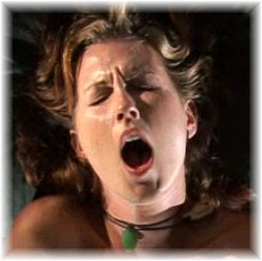 I've finally figured it out. I thought there was much more to Progressive Eruptions. Perhaps hallucinogens and Pink floyd. But here it is:

Progressive Eruptions is one natural, eternal orgasm for Shaw Kenawe dedicated to obama. Her obsession with him and her apologies are indicative of this …

She would be all over Barney Frank (she loves the accent), but I think she still has enough of an attachment to the real world to know that she is not his type.

Posted by bluepitbull at 3:25 PM

Whether or not bluepitbull knows about her travails is quite beside the point. Any would-be cyber-bully or troll would be wiser to think before they flame. Bloggers are not nameless, faceless objects for shameless stereotyping, but caring people who live, work, pay taxes, contribute to the common good, and suffer the same problems of living as the rest of humanity … regardless of party, gender, race, religion, sexual orientation, or ethnicity.

Bluepitbull is not merely a predator, but a serial predator. He has subjected Shaw to a pervasive pattern of harassment here, here, and here. How low can a he go!

So bluepitbull, unmanly coward that you are, the time is long overdue to clean up your act, apologize to Shaw, and stop the sadistic and sexist cyber-bullying … NOW!

And please, everyone who visits, leave a kind word of support for Shaw and best wishes for her recovery.
Posted by (O)CT(O)PUS at Monday, October 05, 2009