IT’S DÉJÀ VU ALL OVER AGAIN

Someone recently reminded me of this Yogi Berra-ism, one of the many he is famous for and when I saw a picture of the recent campus protests in California, the quote immediately came to mind.

Young people on several college campuses reacted to recent ugly events with racial overtones happening in and around their campuses. At UC San Diego a KKK styled pillowcase was placed on the statue of Dr Suess creator, Theodor Geisel which stands outside the main campus library. This was the third incident in three weeks. The other two involved a cookout that mocked Black History Month (sound familiar?) and a noose being found on a library shelf.

Indeed, the tone of the environment is not confined to just the San Diego area. UC Davis also had an incident which targeted a Jewish student with a swastika carved on her door. At UC Santa Cruz, officials found an image of a noose scribbled on the inside of a bathroom door.


Several campuses participated in the protest as a sign of solidarity and UCLA demonstrators called on administrators to institute a required ethnic studies course that would teach students about other cultures. 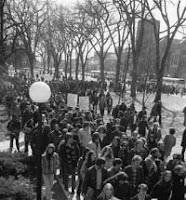 For those who insist that racism is not an issue in this country and that every American has equal opportunity and equal treatment all I can say is, “Try selling that bag of dog crap on one of these campuses.”

Young people coming out to protest and demand social justice reminded me of my own youth and the protests of our time and “it’s déjà vu all over again.”

And when these young people speak of the “tone of the environment” I can’t help but think of the angry rhetoric that has been spewed by the hate mongers against immigrants, blacks, Jews, gays, Muslims and liberals and how the continuous repetition of this garbage is affecting not just the California campus environment but the environment across America.
But here is hope and I bow to the next generation of activists.