No TEA for me please.

Rand Paul has things backwards and I don't mean his name. His win in the Kentucky Senate Republican Primary is not quite the same thing as being elected Senator and of course it's at least a few furlongs short of winning the Derby, or "taking back the Government" since, of course it wasn't taken from the voters in the first place. OK, there was Bush V. Gore, but you know what I mean.

Pretending that having been voted out of office was a breach of democracy seems to work for those at the Tea Party table, but then anything 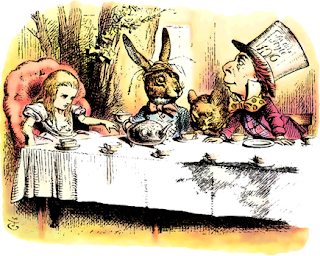 seems to work except reality and the reality is that we're not taxed enough already and we haven't had the tax increase they hope you believe we've had. Yes, we may be taxed unfairly and tax policy may have been written by people who can afford lobbyists and huge campaign donations, but beyond the amorphous anger, I haven't heard any proposals for a new tax code that could approach remedying the debt in any reasonable time much less as quickly as we paid off World War II.

They won't come up with one either unless they dispense with the repeatedly disproved fallacy that cutting taxes for the very rich will increase government revenues, spur investment in new businesses and boost employment and won't cause investment bubbles -- and that laissez faire capitalism doesn't lead to monopolies, corruption of government, fewer choices for consumers and less opportunities for small business.

In real terms most of us are paying less in Income tax than we used to -- less than at any time in my lifetime. The countries that have lower taxes are few and tend to have economies based on gambling, money laundering or revenues from things like the Panama Canal. The Republicans were ousted because of public anger and frustration with corporate control over people's lives, because of another apparently pointless and interminable war and the fear mongering that's eroded our freedom. I don't see where Mad Hatters like Rand Paul are addressing that and I do see that the Tea movement, if we can fall it that, is based on the hope that shattering the old form of government will magically cause freedom, justice and prosperity to break out and allow "the people" to control their own destiny. Sound like Marx to you? It does to me too. Does it sound like the same old: "don't trust them, but trust us even though we don't really have a plan other than to cloud your mind with anger?" It does to me too.
Posted by Capt. Fogg at Wednesday, May 19, 2010