WITH A WHIMPER NOT A BANG 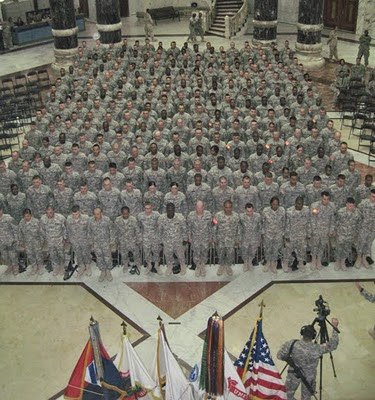 Last night, the Iraq War ended with nothing to celebrate. Seven years and five months later, as the last combat brigade crossed the border from Iraq into Kuwait, the war ended with a whimper although 50,000 advisory personnel will remain behind for another year. After 4,415 American fatalities, 32,000 American wounded, millions of Iraqi casualties, the countless broken lives and wasted treasure … Mission Unaccomplished has been one long, tortuous saga of arrogance, incompetence, and stupidity bordering on criminal.

When our Vietnam veterans returned from war, they were vilified as proxies for the villains who sent them there. This time, we avoided the injustice. This time, we hurled our contempt at Bush, Cheney, Rumsfeld, and Bremer but honored our troops.

I have good reason to honor our troops. My oldest daughter is an Iraq War veteran. She served in 3 deployments, each ranging from 15 to 22 months. War is a daily hell for the folks back home, a palpable anxiety that never goes away, dreading every knock at the door or telephone call in the middle of the night, the empty place at the holiday table, the person missing from every birth and funeral - seven years and five months of Family Life Interrupted.

I consider myself lucky. My daughter came home alive and intact. Tens of thousands of families were unlucky. Later I learned of the near misses - her barracks destroyed by a rocket while working overtime, nightly mortar fire, the roadside bomb that blew apart her colleagues and almost claimed my daughter, who scarcely recovered from flashbacks and nightmares before she was deployed yet again.

What has this mission accomplished? Iraq is a nation in ruins. The criminals who prosecuted this war will never be held accountable.  Ashes mingle with pollen. A police state has risen in the east. Again, our public square fills with indignant desert birds clamoring for new blood. There is nothing to rejoice, and the wine is too bitter.