You know, there’s a lot of idiots out there, so I don’t like to concentrate on any one of them, to the exclusion of the other idiots.

If we did those three or four things, I can't tell you what a sane, calm, civil, fun-loving society we would have. Take guns out of the possession, out of the hands of liberals. Take their typewriters and their keyboards away from 'em. Don't let 'em anywhere near a gun and control their speech, and you would wipe out 90 percent of the crime, 85 to 95 percent of the hate and 100 percent of the lies from society.

This, coming from Rush Limbaugh, who, speaking about President Obama, said to a caller, "He's taking away freedom, incrementally each and every day, making another big grab at it. That's not hypocrisy. That's tyranny.”

But I suppose you have to be generous and remember that his audience is made up of socially-inept mouthbreathers who spell the word “hippockrassy,” So let’s look to vent our spleen elsewhere. 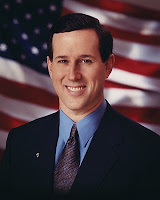 Former Senator Rick Santorum has been out of office for about four years now, and the lack of a public spotlight is starting to wear on him. After all, he’s kind of a pretty boy, and really, really wants to be the center of attention. So he’s putting out feelers to see if maybe he can run for President in 2012 (and if not as a Republican, maybe he can run as the candidate for the Invasive Theocracy Party).

Ricky is an awesome figure in American politics. I love this guy. I mean, I'm not sure what combination of medications he used in order to appear sane, at least long enough to get elected; but since then, he's built up a body of work that basically makes him a leper in Pennsylvania politics. At least, to anybody but a devout Catholic.

Santorum is a man who believes that consensual sexual relations between two adult men is exactly the same as a man having sex with a dog.

(And you know, he never even addresses the question of whether the dog is a top or not. But I digress.)

The controversy surrounding his blatant homophobia was so public, so acrimonious and so lung-searingly rancid that it prompted gay advice columnist Dan Savage to run a contest defining the word "santorum" (small ess, of course, and therefore protected by satire laws). And the final determination?

This definition is now spread so widely across the internet that Santorum can't escape it. Nevertheless, he plans to try.

But in the course of his journey to an ignominious defeat, he's providing still more fascinating soundbites.

Yup, that's right. In the course of trying to make an argument against abortion, he actually says:


The question is -- and this is what Barack Obama didn't want to answer -- is that human life a person under the Constitution? And Barack Obama says no. Well if that person -- human life is not a person, then -- I find it almost remarkable for a black man to say, 'we're going to decide who are people and who are not people.'

Yup. Damn those uppity negroes. Why can't they see that it's the white folks who should make those decisions? We have their best interests in mind, after all.

So I'll tell you what, Right Wing. You stop taking quotes from our guys out of context, and I'll do the same for you.
Posted by Nameless Cynic at Thursday, January 27, 2011