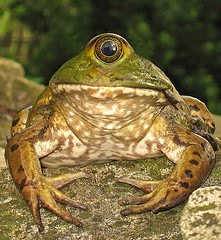 
Whatever you call it, a silly anecdote or imperfect metaphor, the boiling frog story serves a useful purpose, and it goes like this. If you place a frog in boiling water, it will immediately jump out; but if you place the same frog in cold water that is heated slowly, it will not notice the gradual rise in temperature but will stay in the water until it boils to death. No frogs were harmed in the writing of this post, but the boiling frog story is a useful metaphor to describe how people refuse to recognize a threat that occurs gradually.

Climate change deniers are akin to slow boiling frogs. For most folks, the climate change crisis is vague and impalpable. You cannot see it, touch it, or watch it happen on cable news. It lacks the immediate drama of a hurricane or tsunami. Climate change may not be noticed for a decade or even within a lifetime. Yet, it exists today as a set of observations and data points that are too arcane and abstract for many people to grasp. But make no mistake: Global climate change is here … a dark cloud hanging over the lives of our grandchildren and future generations. Despite the preponderance of data, there are skeptics, doubters, and boiled frogs. A case in point (source): 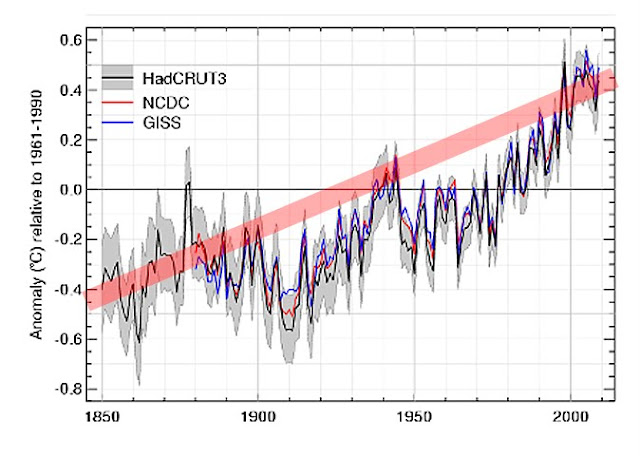 When a climate scientist looks at the above graph, the most obvious feature is the red [my addition] trend line. The above graph plots rising temperatures from different data sources. The skeptical boiled frog might look at these data and say: “So what! It proves nothing.”

There are two statistical concepts to bear in mind. Some data points conform to a pattern while others seem randomly spread. When data points fall outside a trend line, we call these “outliers,” a fancy word for random distribution. The skeptical boiled frog focuses on the random jitters and ignores the trend line. “So what,” croaks the frog, “Mother Earth has mood swings.” My point: Statistical outliers turn boiled frogs into outrageous liars. 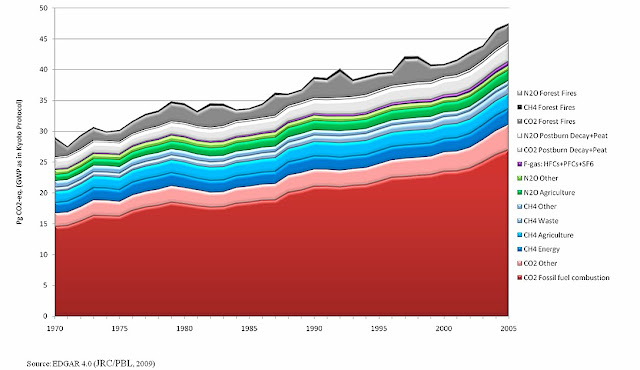 What this graph shows are the various types of greenhouse emissions, such as carbon dioxide, methane, nitrous oxide, and fluorocarbons from various sources. Most importantly, the graph shows the source of each greenhouse gas: From forest fires, from natural decay, from agriculture, from waste, and from fossil fuel combustion. Notice the large red area dominating the bottom half of the graph. This represents carbon dioxide as a product of fossil fuel consumption. What does this mean?

It means climate change is a man-made phenomenon. People burn fossil fuels in their cars, homes, and factories. Skeptical boiled frogs have claimed that greenhouse gases come from natural sources ranging from forest fires to flatulence, or from the rise and fall of some geologically unknown Dow Jones. These data tell a different story. It means that more than half of all greenhouse gases (56% of total emissions) have a human origin. Hence, the term “anthropogenic,” meaning “caused by human beings.” 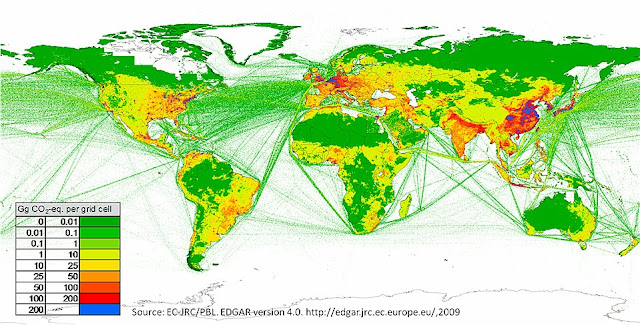 This color-coded map shows the distribution of carbon dioxide around the world. Notice how concentrations of CO2 emissions correspond with areas of human population density and, most especially, with areas having the highest levels of industrial output. These data confirm the relationship between greenhouse gas emissions and human activity.

Overall, the latest observations show that globally averaged levels of carbon dioxide (CO2), methane (CH4) and nitrous oxide (N2O) have reached new highs in 2008: Higher than those of pre-industrial times (before 1750) by 38%, 157% and 19%, respectively. Within the past 10 years alone, levels of greenhouse gases in the atmosphere have increased 26.2%.

Admittedly, the boiling frog story employs a flawed metaphor. Experience has shown that most frogs are too restless to sit still long enough for any pot of water to reach the boiling point. However, the definitive experiment was performed in 1869 by the German physiologist, Friedrich Goltz, who was searching for the location of the soul and demonstrated a fundamental truth. Frogs that had their brains removed will remain in slowly heated water; whereas frogs with intact brains will promptly escape. Thus, I end my post with this observation:  Climate change deniers, unlike their intact amphibian counterparts, have neither brains nor souls.

UPDATE: Readers may also be interested in this slide show prepared by the Philosophy Department at UCSD. There is a brief history of the climate change debate starting with John Tyndall, the first to discover the greenhouse properties of CO2, and James Fleming Callendar, who argued as early as the 1930s that increases in CO2 levels would raise global temperatures. My thanks and a hat tip to Flying Junior for the link.
Posted by (O)CT(O)PUS at Thursday, December 10, 2009