THE REPUBLICAN WAR AGAINST CLIMATE SCIENCE: A BOZONE REPORT 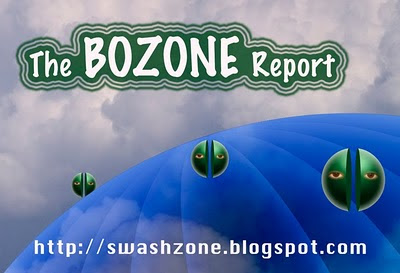 This will be the first of a series of posts, which I will call The Bozone Report. What is a Bozone Report, you ask?  First, a definition:


The Bozone is an aura surrounding exceptionally stupid people for whom no amount of knowledge or intelligence is known to penetrate. Although chemically inert, the Bozone Layer is highly toxic and known to destroy any productive reaction that comes in contact with it.

You did not misread the previous paragraph. This Minority Report released by Inhofe’s staff contains 83 pages of false and misleading statements, shameful accusations, and a list of federal laws allegedly broken that threatens 17 climate scientists with prosecution. In other words, this is the worst case of political thuggery since Senator Joseph McCarthy first employed these tactics 60 years ago. Here is a list of the accused:


Raymond Bradley - Professor in the Department of Geosciences and Director of the Climate System Research Center at the University of Massachusetts, Amherst.

Malcolm Hughes - Regents' Professor in the Laboratory of Tree-Ring Research at the University of Arizona.

Dr. Michael Oppenheimer - Albert G. Milbank Professor of Geosciences and International Affairs in the Woodrow Wilson School, and the Department of Geosciences at Princeton University.

Dr. Jonathan Overpeck - Co-Director of the Institute of the Environment, and Professor in the Department of Geosciences and Atmospheric Sciences, University of Arizona.

The Minority Report accuses the Climate 17 (listed above) of unlawful use of federal funds and ethical misconduct. Specifically, it calls for an investigation to determine if any of the following Federal laws were violated:

Shelby Amendment – accuses them of failing to comply with an Agency request for raw data produced with federal funds.

OSTP Policy Directive – accuses them of “misconduct in research,” which is punishable with “criminal liability” and debarment.

The False Claims Act (Criminal) – accuses them of creating a “tampered database” and making claims for payment from Federal funds (note: this statue requires no proof of specific intent to defraud).

Obstruction of Justice: Interference with Congressional Proceedings – accuses them of providing false or misleading testimony (although the Climate 17 never appeared before Congress).

Rep. James Sensenbrenner (R-Wisconsin), the ranking Republican on the House global warming committee, has sent a letter to Dr. Rajendra Pachauri, Chair of the Intergovernmental Panel on Climate Change, calling for these scientists to be blacklisted.

In an interview with the Guardian, Michael Mann noted a sharp rise in hostile email since November:


"Some of the emails make thinly veiled threats of violence against me and even my family, and law enforcement authorities have been made aware of the matter," he told the Guardian. He said the attacks appeared to be a coordinated effort: "Some of them look cut-and-paste."

Gavin Schmidt has seen an increase in Freedom of Information Act requests:


"In my previous six years I dealt with one FoIA request. In the last three months, we have had to deal with I think eight," he said. "These FoIAs are fishing expeditions for potentially embarrassing content but they are not FoIA requests for scientific information … The idea very clearly is to let it be known that should you be a scientist who speaks out in public then you will be intimidated, you will be harassed, and you will be threatened … The idea very clearly is to put a chilling effect on scientists speaking out in public and to tell others to keep their heads down."

The Minority Report is affront to my most cherished beliefs and values. The tactics employed by Congressional Republicans are as oppressive and dastardly as any employed by a totalitarian regime in recent memory. As much as I regret having to say this: The Republicans are also at war against me, and I intend to fight them with any and all means necessary.