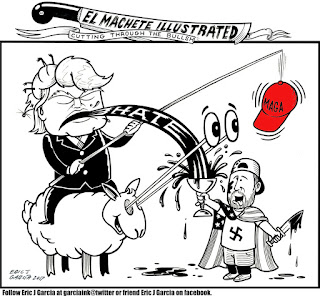 “Obi Wan, weak mindedness is strong in this one.”

In the morning edition of our void and vapid tabloid, one letter writer tells us to “stop whining and support the president” (Bill Sances of Vero Beach, Florida). He speaks of “elite, whining, bleeding-heart liberals who seemingly dominate the letters section of this newspaper.”

If POTUS #45 says “jump off a bridge,” would Mr. Sances take his chances? He reminds me of the Jonestown mass suicide cult. For years, we witnessed Donald Trump’s own voice on videotape:

Such soundbites would sink any candidate … unless your followers happen to be the Three Troglodytes of Hear No, See No, and Speak No Evil.

Trump’s secret to success is the motivated reasoning of his followers. They ignore his defects of character, filter only the evidence they want to hear, and willfully deceive themselves. In Jonestown, the diehard lemmings died hard. When a leader gaslights an entire nation, we get fascism.

Yes, Obi Wan. There are Sheeple everywhere who refuse to learn the lessons of history. Sheeple suckered by self-glorifying narcissists … from Il Duce to Pinochet … who brought entire nations to ruin.
Posted by (O)CT(O)PUS at Friday, July 28, 2017